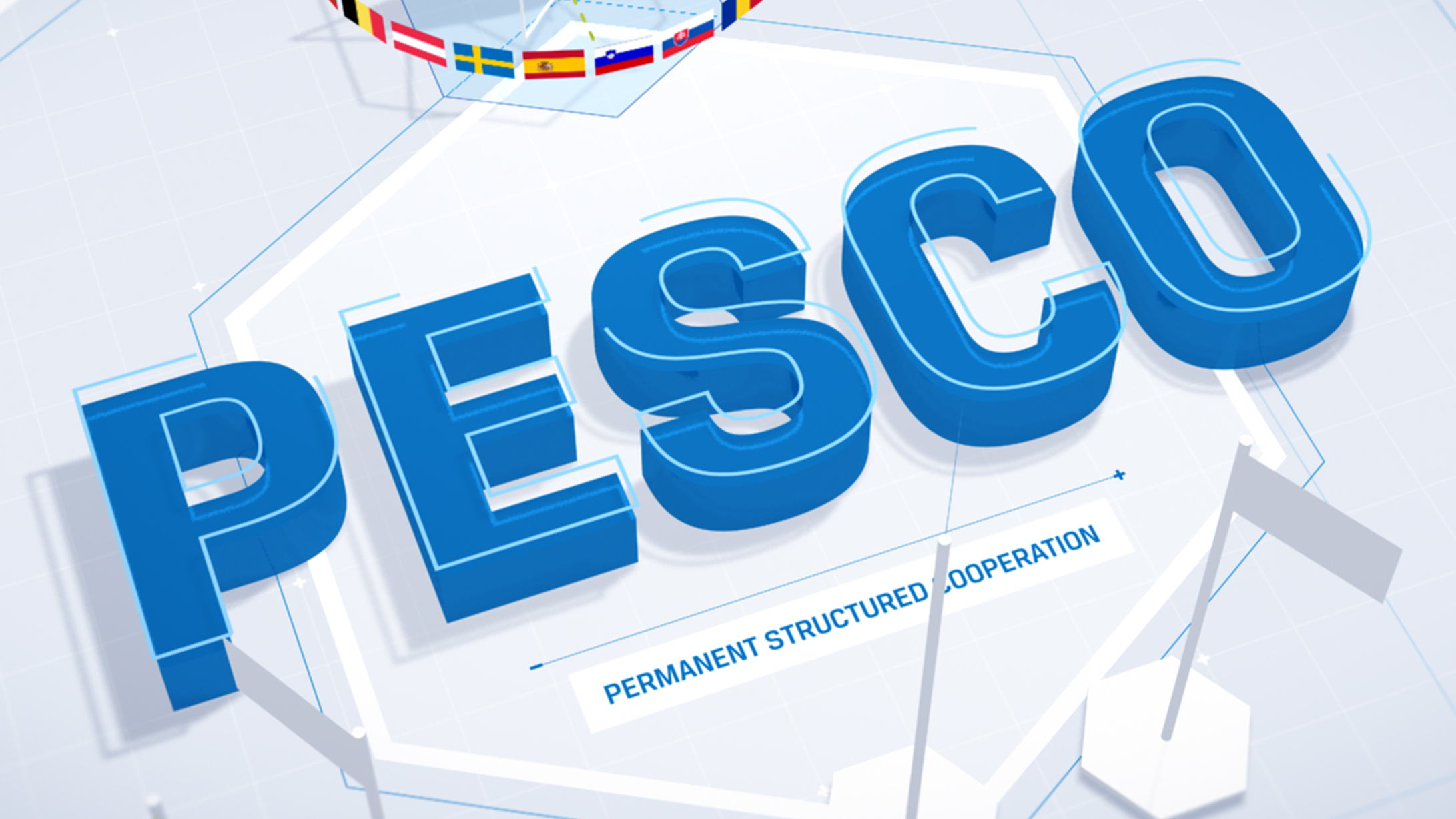 The Permanent Structured Cooperation, or PESCO, is among the most ambitious EU defence initiatives. Launched in December 2017, it aims to increase defence cooperation among the participating EU Member States to a new level. Twenty-five participating states signed up to 20 more binding commitments to jointly plan, develop and invest in shared capability projects. As PESCO approaches its fifth anniversary, the PESCO Secretariat – the European Defence Agency (EDA), the European External Action Service (EEAS) and the European Union Military Staff (EUMS) – have prepared an annual PESCO Projects Progress Report which highlights the underlying diversity of progress in ongoing projects.

Development: Setting the pace of progress 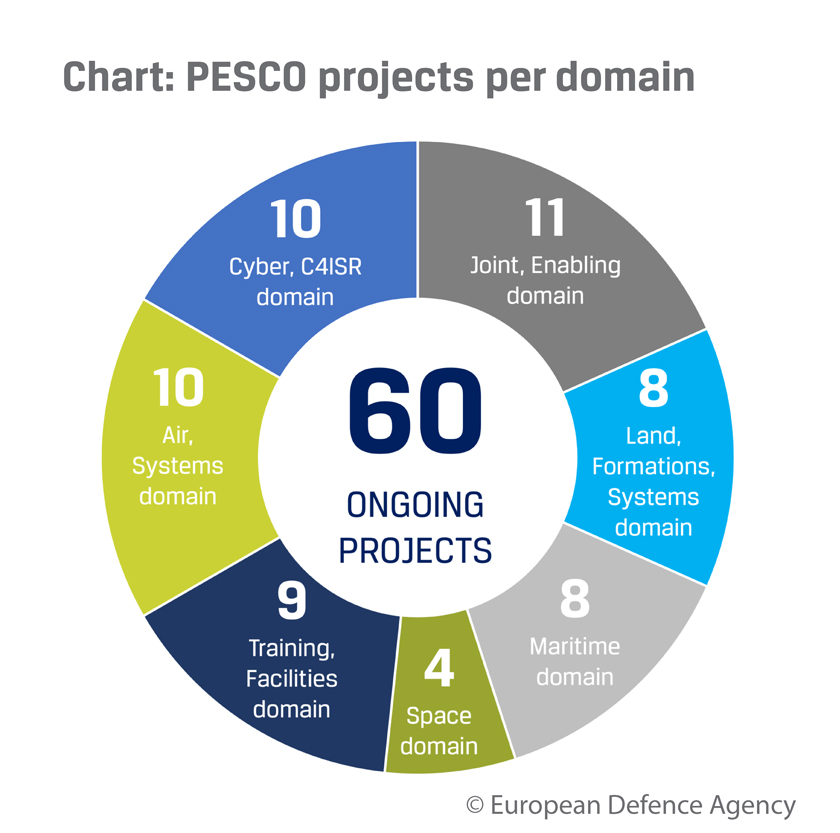 The development of military capabilities is undertaken with a long-term perspective with PESCO project cycles running from ideation, throughout incubation, execution and closing phases. With the complexity and life cycles of defence capabilities spanning decades, progress across individual years can be limited within this context.

According to the annual Projects Progress Report, many of the 60 ongoing PESCO projects are advancing according to plan. Progress has been recorded across domains with 21 projects moving forward in their development life cycle. Today, 18 projects are  in the penultimate phase of development (execution phase), a number which has more than doubled in the last year.

The scope of PESCO projects is extremely varied, from developing brand new capabilities such as the European Patrol Corvette and the new generation small RPAS, to the harmonisation of requirements like the Strategic Air Transport for Outsized Cargo (SATOC) project, or training, such as the European Union Network of Diving Centres. To date, two projects from the first wave, Cyber Rapid Response Teams (CRRT) and European Medical Command (EMC) have already reached Full Operating Capability (FOC).

Third states can be exceptionally invited by the participating Member States to join individual PESCO projects. This has already been the case for three countries – the United States, Canada and Norway, which participate in the Military Mobility project. Other third states have also signalled interest to take part in this and other PESCO projects. 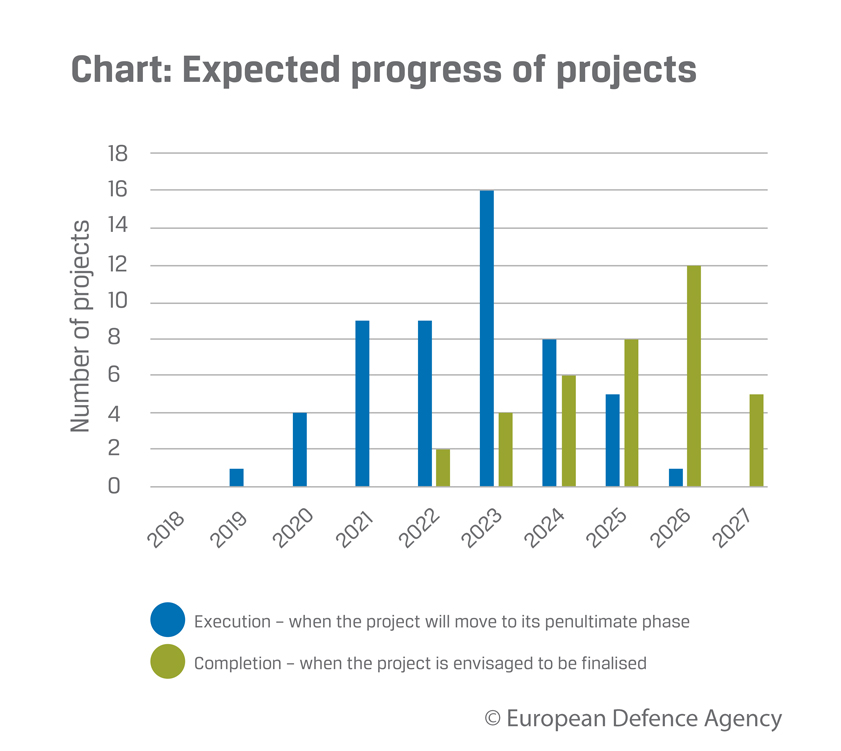 In the timelines submitted for the development of PESCO projects, 2025-2026 are foreseen as key years for the delivery of concrete results. An analysis of trends shows that 20 projects are maintaining their ambition to deliver by 2025.

Considering their status, objectives and deliverables achieved, it can be expected that European Secured Software Defined Radio (ESSOR) and Military Mobility (projects from the first wave), as well as CBRN Surveillance as a Service (CBRN SaaS) and Integrated Unmanned Ground System (iUGS) (projects from the second wave), will deliver their expected outcomes within the next three years.

With 60 ongoing projects, delays in development are to be expected, particularly given the interruptions caused by the COVID-19 pandemic. PESCO cannot be expected to immediately put an end to years of fragmentation in terms of capability development efforts in the EU. The available data shows that six projects, which were expected to deliver concrete results before 2025, are now falling behind, while 15 other projects are facing delays.

There are strong arguments and underlying factors to be considered, when undertaking capability development. Among them: the infrastructure, complexity of tasks, lack of financial support such as EU funding, the need to synchronise the project milestones with the linked European Defence Industrial Development Programme (EDIDP) projects and the pandemic situation.

The overall trends where delays are observed find that many PESCO projects face a lack of planning, both financial and practical in terms of project timelines.

Given the delays over several years, it is likely that careful consideration will be given to revive or retire projects that have not shown tangible progress so far. Where projects have not advanced as expected, some are already looking at their current progress and redefining their objectives and scope.

Determination: Towards a fifth year and a fifth wave

Against the backdrop of Russia’s war of aggression against Ukraine and its implications for EU defence, PESCO and stepping up EU security and defence have the overwhelming support of Member States. Despite the delays observed across several projects, only 3% of PESCO projects are deemed to be at a high-risk failure. Furthermore, PESCO is advancing along its global timeline and a call for the fifth wave PESCO project proposals was issued in July 2022 with new PESCO projects due to be selected by Ministers of Defence in May 2023.

Despite uneven progress, the PESCO initiative remains at the heart of EU defence cooperation. By delivering projects that reinforce the EU capability landscape, while enhancing cooperation between the Member States, it has the potential to serve as a cornerstone of the EU’s defence and security. There is strong support for PESCO at the EU level and, underlining that, projects have been awarded funding from the European Defence Fund (EDF), most notably the European Patrol Corvette and Cyber Rapid Response Teams (CRRTs).

In line with PESCO’s more binding commitments, the EDA is well placed to support cooperation between Member States. So far, the EDA has supported 12 PESCO projects, helping with harmonisation of requirements or delivering capability through projects run at the EDA. During the last year, EDA’s support has formally been requested for four PESCO projects.

December 2022 will mark five years since 25 EU leaders formally launched PESCO with a call for it to be inclusive and ambitious.  After five years of joint work, it is a common determination that will define PESCO’s future.